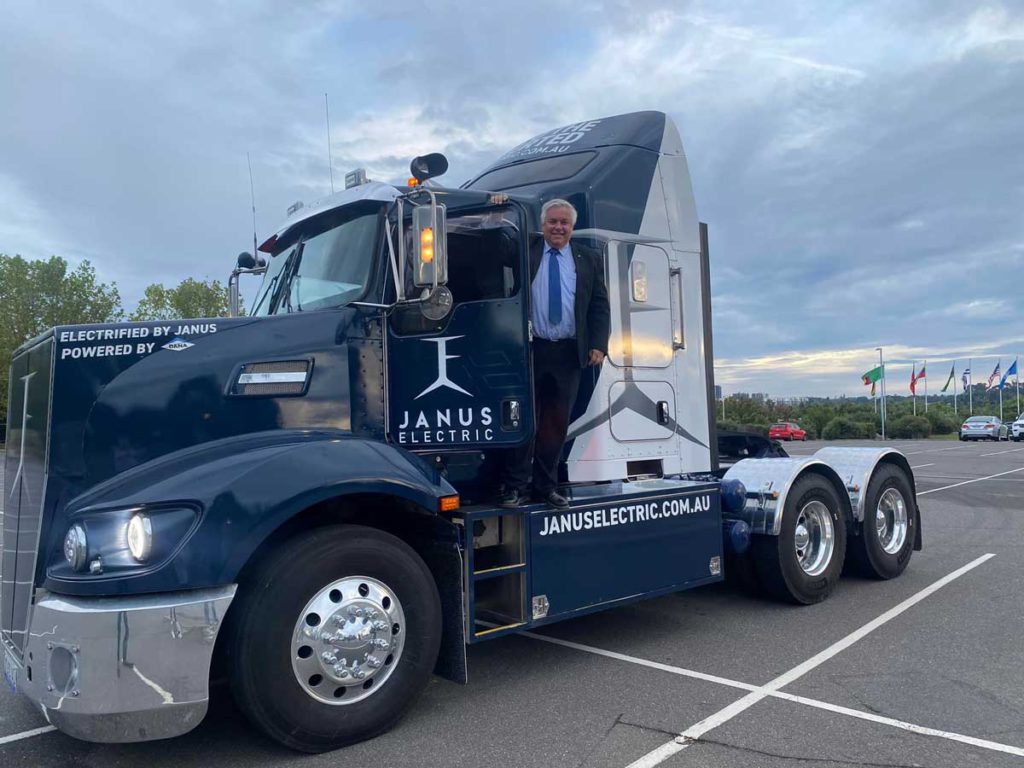 It was only a short run – around 60km round trip – but for Janus Electric co-founder and general manager Lex Forsyth it’s already gone down as his drive of the year.

Forsyth was behind the wheel of a 2017 Freightliner Coronado that’s been fully converted by his company into a battery-powered electric truck.

In the clip below he shares some of the highlights as he tows a 43-tonne load down to Gosford.

Loaded, or empty, the quietest Freightliner on Australian roads soaked up the hills, said Forsyth.

“The other side of it too is the regenerative braking. When you come out to exits, and those sorts of things, there is no application of the brakes, it’s all regenerative braking all the way down to the intersection, and it nearly pulls you to a dead stop.

“For me, it was a real eye-opener to see how much maintenance we’re going to take out of these vehicles by the sheer regenerative braking.

“I’ve driven electric cars and driving an electric truck is just as good. I can’t believe our OEMs aren’t bringing this [technology] quicker to Australia than what they have. It’s surprising.”

Forsyth is inviting all industry to see the groundbreaking exchangeable battery technology up close at a special showcase event at the White Bay Cruise Terminal in Sydney on April 5.

Janus will have the Freightliner and two other converted trucks – a Western Star and Kenworth – on show from 10am, followed by an investor lunch and presentation from midday.

Forsyth, who took the Freightliner to Canberra yesterday to give Senator Rex Patrick a ride to work on federal budget day, is encouraged by the feedback from industry and early uptake.

Cement Australia will have a converted Kenworth T410 in operation out of Brisbane in April with Fennel Forestry and Jim Pearson Transport also among the early converts.

Forsyth said Janus Electric is also starting to roll out the charging network with sites at Prestons, Port Macquarie, Brisbane and Berkeley Vale either close to being finalised or already up and running in preparation for Sydney to Brisbane operation.

All of the above is happening without support from federal or state governments, which are putting all their faith in hydrogen as the best alternative to diesel for the heavy vehicle industry.

“It scares me what we’re hearing about hydrogen,” said Forsyth.

“If hydrogen made sense we would do it. We’re not agnostic to different energy sources.

“What people don’t realise is that when you take energy and change it to another form, then change it back, you have loses.

“It is a white elephant for road transport. It is just going to be the greatest waste of taxpayer money that we’ve ever seen.”